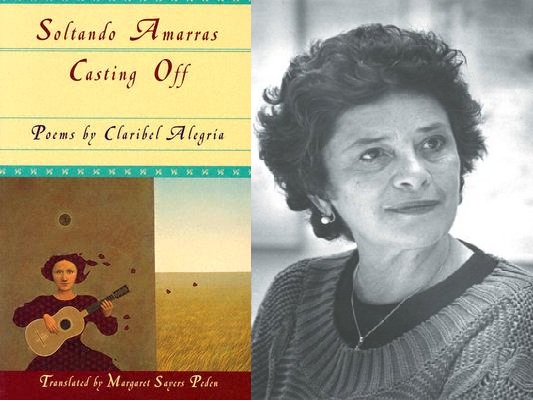 CASTING OFF: THE POETRY OF CLARIBEL ALEGRIA

Claribel  Alegría   (born May 12, 1924) , the Nicaraguan poet, essayist, novelist, and journalist has become a major voice in the literature of contemporary Central America. I came across the name of  Claribel  Alegría   some years ago when she was nominated for Nobel Prize for Literature. Though born in Nicaragua on May 12, 1924, she grew up in El Salvador and was  also a major voice in the struggle for liberation in El Salvador and in Central America. She moved to the United States in 1943 where she attended George Washington University and earned a B.A. in philosophy and letters.


While in Washington, she became a mentee of the great Spanish poet Juan Ramon Jimnez. Jiménez insisted that Alegría learn about rhyme and about sonnet forms and about meter—things that she had never bothered with before. She had always written in free verse, but Jiménez pointed out that free verse was actually a much more difficult style of poetry to master and that she should, instead, begin with more absolute forms. He also insisted that she go to museums so that she could understand the relationship between visual art and poetry. Jiménez instilled in Alegría a discipline that she had lacked as a poet, and he is responsible for the publication of her first book. Putting together this first book was not her decision, but Jiménez's. After three years of studying with Jiménez, he chose 22 of her poems, and they became Anillo de silencio, which was published in 1948. In an interview with Varela, Alegría has described the relationship with Jiménez as painful because Jiménez was very critical of her work and kept pushing her to do better .


In 1947  Alegría   married the U.S.-born journalist Darwin J. ("Bud") Flakoll. Flakoll coauthored some of her novels and translated much of her work into English. When her husband died in 1995, Alegría used poetry as a means of coming to terms with his death. The result was an earlier book, Sorrow, in which she transmuted her grief into lyrical sketches of a wounded soul.

This poetry collection titled "Casting off" ably translated by Maragaret Sayers Penden is  lyrical, illuminating and possess a deep meditative quality like that of haikus. In this one also there is an air of sadness but the deeper mood is beyond sadness, sounding like a voice profoundly at peace with itself, suspended in contemplation of the past and eager to embrace the next stage. “I long for that other flight / the one I will undertake alone.”

It is not surprising that "Casting Off"  begins by acknowledging Spain's 16th-century mystic Santa Teresa de Jesus and her impatience to leave the world of the living: "Muero porque no muero/I die because I am not dying." After all, 79-year-old Alegria comes from a culture where the living stay in constant conversation with the dead. She confesses in an interview,  "Since I was very young the two main themes in my writing have been love and death. When I was young, however, death was distant. Now death is near, especially since Bud passed away. Now death is my friend. I speak to her."

In a  complex world her eloquence of simplicity moves us. It flings open faded shutters and floods us with the joy of feeling. Many poems in "Casting off" are also an exploration of grief  but graced with lyrical beauty and stunning imagery.  The poet’s words have the power to move us, often to tears, as in the poems  below:

The Ache of Absence

Oh  how my fingertips ache
when I hold out my hand
and don’t find you.

Alegria turns inward, writing with delicacy and restraint about winding down her life. Although she knows the difficulties of "Casting off" and is  reluctant to let go, Alegria does see death as a reunion with loved ones who have gone before her, leaving her entangled in memories and unable to sleep.

Despite
my long conversation
with death
it is hard for me
to let go of myself
to engender myself
to conceive myself.

Now
Now
at this hour
death has more spark
than life

You made the great leap

I Must Let you Go

You, too
I must let you go
I must relieve you of the weight
of my mourning
leave you, finally, alone
with your enigma

Most of her poems have a bare, minimalist structure, like empty rooms with whitewashed walls and windows opening onto visions that shimmer somewhere between “caressing colors /  with all five senses / and this world of prophetic dreams.”

The past looms large as the future diminishes. The poems illuminate the open road that lies before her and evoke the feelings that go with charting new terrain. In "Limbo" Alegria writes: "I feel good/ in this limbo/all alone/ with my dead."

Her poems also speak to women, urging them to break free from the oppression of patriarchy in all its guises. There are poems where she writes of feelings, and of mythological characters, of new horizons, and of her cat: “How I envy my cat / who never suffers from insomnia.” Her mythological poems such as Cassandra, Antigone and Archne are a way of articulating her own pain, self-pity and ideologies for liberation to a "new horizon" of "star-silence." Let us consider the poem titled "Janus" which gives a new dimension to the woes of this God.

Poems expressing what it means to grow old ("As my future/ grows shorter/ the past/when summoned /converted into now/ traps me in its nets") and the difficulties of "casting off" become splendid reflective testimonials to a belief in redemptive capacities of courage and love. What results is a stark, grief-filled landscape at once personal and universal.

My footsteps are leading
toward quiet solitude
toward the star-silence
that has no more questions.

As Luis Valenzuela rightly quotes -" Illumination is the word that comes to mind while reading these poems. Not only because Claribel  Alegría's dazzling, simple words, which allow us to see the duality of life as one single luminous flow of love-but also because she is an illumined poet, courageous in singing the essential colors of darkness" 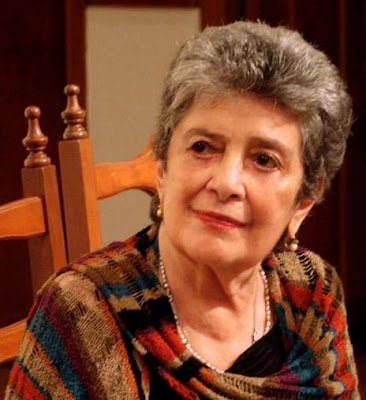