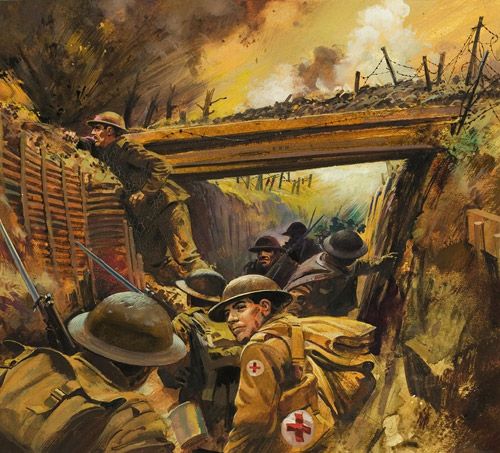 What regiment are you from
brothers?

Word trembling
in the night

Ranked by T.S. Eliot as “one of the very few authentic poets” of the last century and by Allen Tate as akin to Paul Valery in his sensitivity, Giuseppe Ungaretti wrote verse that was marked by simple vocabulary, unusual lyric tension and illuminating images.

A literary minimalist, Giuseppe Ungaretti is considered by some critics  the greatest Italian poet of the 20th Century. He served an infantryman on  the lower Isonzo front with the 3rd Army from 1915 until early 1918. In the  spring, he was transferred to the Western Front where Italian forces fought  with distinction. In his most famous war poem, RIVERS, he alludes to his  birth in Egypt, his youth in Tuscany and his service on both fronts during  the Great War. Ungaretti's pure style was achieved by  condensation to essentials and is in the tradition of the French Symbolists.

The above poem conjures a situation with marvelous economy, far beyond the wordy poetic norms of the day. Columns of infantry swap greetings as they file past each other. These words hang in the air, defying the silence and the risk of drawing enemy fire as new leaves uncurl despite the risk of frost, and as his own words unfurl despite artillery and barbed wire.

These tiny affirmations of shared humanity and common purpose, involuntary because instinctive, hinge on the title-word ‘brothers’, so rich in meaning for the poet. Politicians and demagogues boasted that the war was bonding Italians together for the first time. Ungaretti lived that process with a rare intensity.

The poet, in the trenches during WW1, grasps the very core of humanity and Communication in this short verse. He transcends the horror of the trenches and reaches out, letting the spoken word carry his mixture of anxiety, isolation and hope, through darkness and hell, searching for signs of life that can turn out to be a fellow soldier or enemy. His symbolism seems to me so genial; I cannot dissect it or describe it closer. It just grips me, esp the final pleading repletion of ‘Brothers’. On the war front there aren’t friends or enemies, winners or losers, but only BROTHERS.  This is the key word that stands out in the second and last verses and in the title.

In this distressing scenario, the individual rediscovers human solidarity, which originates from that feeling of brotherhood that levels all men, making them equal and united regardless of which trench, army, or country one belongs. 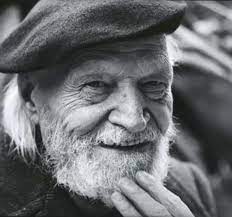