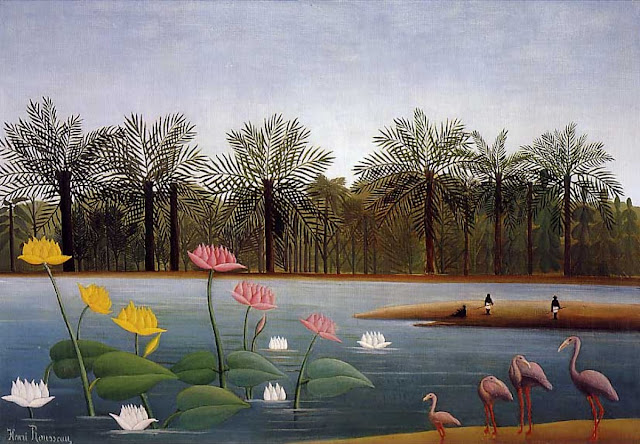 One of the first conditions of happiness is that the link between man and nature shall not be broken. …LEO TOLSTOY
I want to celebrate World Environmental Day with the poems of Wang Wei
Wang Wei (701-761 C.E.) is often spoken of, with his contemporaries Li Po and Tu Fu, as one of the three greatest poets in China's 3,000-year poetic tradition. Of the three, Wang was the consummate master of the short imagistic landscape poem that came to typify classical Chinese poetry. He developed a nature poetry of resounding tranquility wherein deep understanding goes far beyond the words on the page―a poetics that can be traced to his assiduous practice of Ch'an (Zen) Buddhism. But in spite of this philosophical depth, Wang is not a difficult poet. Indeed, he may be the most immediately appealing of China's great poets and he may even sound utterly contemporary. Many of his best poems are incredibly concise, composed of only twenty words, and they often turn on the tiniest details: a bird's cry, a splinter of light on moss, an egret's wingbeat. Such imagistic clarity is not surprising since Wang was also one of China's greatest landscape painters.
On Leaving the Wang River retreat
By Wang Wei
Translated by David Hinton
At last I put my carriage in motion
Go sadly out from these ivied pines
Can I bear to leave these blue hills?
And the green stream – what of that?
It’s deceptively simple. These four lines carry so much meaning. The narrator is leaving, but that doesn’t matter. The reasons for his departure aren’t important. The real world isn’t important. The issues are small and perhaps petty when faced with such glory. His surroundings here mean more to him, in this instance, than the whole of mankind combined. Leaving the purity of the ivied pines behind is a lamentable loss. Walking away from the blue hills, the hills of stability, of intelligence and of heaven itself is no easy departure. They represent much. It’s all about the colours. The sky and the sea are both blue, as are these symbolic hills. And the stream, the green stream, that represents oneness with nature that is the hardest of all to walk away from. The line “at last I put my carriage in motion,” says it all. The reluctance is palpable. Simple language is the key.
Drifting on the Lake
By Wang Wei
Translated by Tony Barnstone and Chou Ping
Autumn is crisp and the firmament far,
especially far from where people live.
I look at cranes on the sand
and am immersed in joy when I see mountains beyond the clouds.
Dusk inks the crystal ripples.
Leisurely the white moon comes out.
Tonight I am with my oar, alone, and can do everything,
yet waver, not willing to return.
Sketching Things
By Wang Wei
Translated by Tony Barnstone and Chou Ping
Slender clouds. On the pavilion a small rain.
Noon, but I'm too lazy to open the far cloister.
I sit looking at moss so green
my clothes are soaked with color.
Cooling Off
By Wang Wei
Translated by Tony Barnstone and Chou Ping
Clear waters drift through the immensity of a tall forest.
In front of me a huge river mouth
receives the long wind.
Deep ripples hold white sand
and white fish swimming as in a void.
I sprawl on a big rock,
billows nourishing my humble body.
I gargle with water and wash my feet.
A fisherman pauses out on the surf.
So many fish long for bait. I look
only to the east with its lotus leaves.
The poetry of Wang Wei is very much driven by descriptions of nature. Regardless of what’s happening in the world, whether it’s war or a woeful departure, nature remains a beautiful inspiration. Nothing can change that for him, as he marches on, as he plods through life, the splendor of nature remains.
Let us Reimagine, Recreate and Restore Nature on this World Environmental Day
Posted by PGR Nair at 1:30 AM