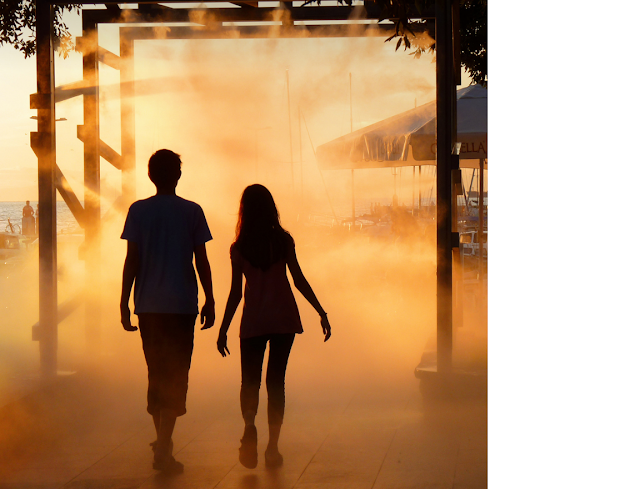 The year's doors open
like those of language,
toward the unknown.
Last night you told me:
tomorrow
we shall have to think up signs,
sketch a landscape, fabricate a plan
on the double page
of day and paper.
Tomorrow, we shall have to invent,
once more,
the reality of this world.

I opened my eyes late.
For a second of a second
I felt what the Aztec felt,
on the crest of the promontory,
lying in wait
for time's uncertain return
through cracks in the horizon.

But no, the year had returned.
It filled all the room
and my look almost touched it.
Time, with no help from us,
had placed
in exactly the same order as yesterday
houses in the empty street,
snow on the houses,
silence on the snow.

You were beside me,
still asleep.
The day had invented you
but you hadn't yet accepted
being invented by the day.
--Nor possibly my being invented, either.
You were in another day.

You were beside me
and I saw you, like the snow,
asleep among the appearances.
Time, with no help from us,
invents houses, streets, trees,
and sleeping women.

When you open your eyes
we'll walk, once more,
among the hours and their inventions.
We'll walk among appearances
and bear witness to time and its conjugations.
Perhaps we'll open the day's doors.
And then we shall enter the unknown.

Poets have the power to awaken a new reality in us even about the arrival of a New Year. This has always been my most loved New Year Poem. The Poet puts a new perspective in this poem as if stepping into a New Year is like stepping into a new terrain, stepping into unknown. I love the enigma and mystery in this one that only a great poet like Octavio Paz can invoke. If only we could write a single New Year poem of this grandeur!

In every sense we invent a new day by opening a new door and that is our challenge. There must be a sense of future and a decision to invent a new reality in all of us. That is Paz's positive New Year message.

Today we stand upon the verge of the unknown. There lies before us the New Year and we are going forth to possess it. Who can tell what we shall find? What new experiences, what changes shall come, what new needs shall arise? Nevertheless, we shall enter the unknown with exhilaration and not with trepidation.

Existence is not just what has occurred. Existence is the realm of human possibilities, everything he can become, everything he is capable of. May you all discover new signs, sketch a new landscape and may 2014 invent a better YOU.

May the reality you create for yourself and for those around you be one full of promise, purpose and positivity.

May the New Year be a blessed one for all of you!

Octavio Paz was the former Mexican Ambassador to India, Nobel Laureate for Literature and one of the greatest poets of Twentieth Century.

PS: Regarding the reference to Aztec , it may be noted that Aztec feared the end of the world when a century ended and they used to perform a New fire ceremony on the eve of the new century in order to stave off the end of the world (Aztec followed a different Calendar and as per it, a century was 52 years ) .

Ref: A Draft of Shadows, and Other poems by Octavio Paz